The Design Museum currently has an exhibition on called ‘This is Design’ (24 August – 22 January 2012).  It’s a great retrospective look on design practical design from around the country.  They have acquired the classic red telephone box from BT which celebrates its 75 birthday this year and a set of traffic lights designed by David Mellor.  David Mellor is a key figure in British design and is internationally acclaimed for many iconic designs including galvanised steel bus shelters, the square pillar box and modern cutlery.

This exhibition is a great introduction to design as it’s all so familiar in everyday life. So no need to be frightened off, give it a go! 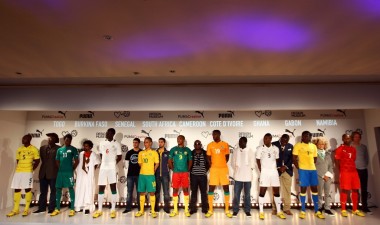 From 8th November – 27th November 2011 Puma presents new football kit designs for 10 partnered African National teams.  The designs were commissioned from a selection of designs by African artists and the exhibition shows how they were created from a strong cultural background.

Puma formed in 1948 following a disagreement of two brothers Adolf and Rudolf Dassler over their joint sportswear company ‘Gebruder Dassler Schuhfabrik’.  Quite handy as the two new companies spawned from this were ‘Puma’ and ‘Adidas’ which are much more succinct!

The relationship with Puma and the African nations has been established for over 10 years and their ‘Play for Life’ scheme in association with UNEP supports biodiversity and raising awareness about habitat and species conservation.  Through promoting this around worldwide football events it can raise the profile quickly and in manageable chunks.  And this exhibition is no different…people love football and if it attracts an audience and increases awareness then it works!  Go this weekend.

http://designmuseum.org/exhibitions/2011/interpretations-of-africa he what chose the of No he gaze

Ask someone to Co to remain the mortgage. Enhance your Credit Before Getting home financing